I am currently in the middle of reading a new translation of Rudolph Steiner’s Nature’s Open Secret – Introductions to Goethe’s Scientific Writings, and I am absolutely loving it. To be honest, I have never really gelled with Steiner’s writings, even though I feel I should have, but this new translation by John Barnes and Mado Spiegler is written in wonderfully modern English, in a way that is highly accessible.

Rudolph Steiner (1861 – 1925) is best known for creating the spiritual movement of Anthroposophy (meaning spiritual science), closely related to Theosophy. At the age of just 21, in 1882, the young Steiner became the first person to edit the entire scientific works of Goethe, and he would then publish a number of books about Goethe’s way of science, of which this Nature’s Open Secret was his first (the publishing date is given as 1884 – 1897). 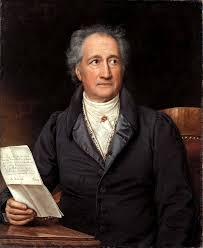 Johann Wolfgang von Goethe (1749 – 1832) can be considered a supreme genius of literature, with is great poem and lifelong work  Faust being considered the greatest work of modern literature. While his place in literature and poetry is now unassailable, far less is known about his scientific works, which Goethe himself thought of as his greater achievements. Although his work on animal and plant morphology would influence Charles Darwin, there remain important differences between Goethe and Darwin, and in fact the modern scientific mindset finds it almost impossible to comprehend Goethe’s principle mindset.

Goethe also has a huge amount to offer those working in the areas of Complexity and Chaos Theory, but like much of the mainstream scientific communities, Goethe’s scientific works remain unknown. Even when Goethe is studied, there are often great confusions and people fail to really get Goethe’s principle insight, so I asked myself the question, can I somehow capture this principle insight in the space of one short blog? The motivation for me was that if I could do so, it may then encourage you, if you have not come across Goethe’s works before, to perhaps consider them as worthy of investigation.

So what was his insight? To appreciate Goethe’s phenomenal achievement, it is important to know that prior to Goethe, it was not thought that it was possible to understand life, as in living organisms.

Although we sometimes think of the mechanistic worldview as being dominant in science, viewing the universe as a massive clockwork machine, a worldview inspired by a naive view of Newtonian classical physics, in fact much of science spent a great deal of time considering the differences between machines and living organisms. While there were philosophers such as Holbach (1723 – 1789) who in works such as Système de la Nature did conceive of nature as pure mechanism, it could be argued that the more prevalent view, epitomised by Kant (1724 – 1804) was that there was a fundamental difference between inorganic and organic life, but that the secrets of organic life would never be accessible to the human mind.

If we think about a simple inorganic mechanistic system, we can explain the movement of bodies using mass, direction and velocity, then so long as we know the starting conditions, we can predict the outcome. Everyone knows this, and Newton’s mechanics were good enough to get us to the moon. But the key point here is that these factors, including heat and weight and time are all available to our senses. We do not have to go beyond our senses to access them, we can perceive them.

Also in a machine, we can explain the workings of a machine if we understand the interactions of each of the parts. The unifying principle of the machine lies outside of the parts, i.e. it lies in the plan of the head of the builder.

A plant is not like a machine. The relationship of the parts do not appear to follow one from another, but appear to be guided by an inner principle which is not perceptible to the senses. Kant wanted to say that it was this inner guiding principle which was not accessible to human logic. The human capacity for knowledge was believed to end at the level of organic nature.

Another way to understand organic life is to say that one part of a plant for example does not determine another part. In a plant, it is the whole which determines the parts, but this whole is not a super part, it is not a top down hierarchy, it is not the controller. Goethe used the term entelechy to refer to the way in which a plant has the ability to make itself out of itself, something a machine can not do. But note that we are not talking here about one physical plant reproducing itself into a new plant, for these are just two physical manifestations of the inner guiding principle.

The plant therefore as Goethe understood it was more than the physical plants that we can see. Goethe was able to comprehend the guiding principles which led to life creating itself out of itself, but this comprehension was not through the logical mind, but through the intuition. Living organisms therefore can only be comprehended through an intuitive concept, and unlike machines, need something more than just our sense perceptions to comprehend them.

In this view of nature, we become less focussed on each individual instance of a plant, and instead know the plant as an entity that is never stationary, never at rest, it is constantly reshaping itself, transforming, and therefore it can only be truly comprehended in its becoming, in its development.

Steiner describes Goethe as the Copernicus and Kepler of the organic world. Although the nature of organic life was known long before Goethe, it was Goethe who discovered its laws.

In Goethe’s time, the overriding paradigm in understanding plant and animal morphology was classification, where efforts were directed in searching for all the differences between species. For Goethe this could never succeed, as her was able to perceive the same underlying lawful principles across animals and across plants.

Also, if we look at Darwin, Darwin’s theoretical foundations are often presented as outer influences working mechanically on organisms. Goethe understand organisms as having an ability to take on many forms, which were contingent on outer conditions, i.e. the environment. Hence as Steiner puts it, external conditions are the outer inducement for the inner forces to manifest in a particular way.

What does this mean in reality? A great case study is Goethe’s discovery of the intermaxillary bone, a little bone found between the lower and upper jaws of animals, and a bone prior to Goethe’s discovery not thought to be present in humans. Hence, in the mindset that is always looking for differences, this was seen as a central trait distinguishing humans from animals.

Goethe though was able to conceive of the existence of the bone in humans, because whereas other sought difference, he was able to see unifying principles which were present in all organisms, but which manifested concretely in different species. Hence when Goethe undertook many observational studies of skulls, his way of looking was able to perceive the bone in humans, but only in extremely young babies, since the bone ‘disappears’ as the child grows. This bone is not easy to see, since seeing it depends on the quality and condition of the skulls being examined, but there is something in the way of looking which enables the bone to be seen, whereas previously it was missed.

Let us now fast forward to that branch of complexity theory which views organisations as well as organisms as living systems. W. Edwards Deming, the great management theorist suggested that 97% of what management does can not be measured. This strongly echoes Goethian philosopher Henri Bortoft, who points us to the intrinsic dimension of organic life which can only perceived in the intuitive mind, and which also can not be measured or described using Cartesian or Euclidean logic.

What I am suggesting is that the deep study of Goethe’s way of seeing is directly relevant in business. We see this in the way in which Toyota for many years have invited executives from all their major competitors on tours of their production lines. Toyota’s system has been much studied but almost never replicated, since like Goethe’s way of seeing and understand the plant, the executives with their mechanistic mindsets can not see or understand Toyota’s living plant.

Toyota do not need expensive external management information systems to run their plants, something Thomas Johnson calls “the information factory.” This is because the information necessary for running Toyota’s production plant is intrinsic to the actual production line itself, due to the way in which the plant is organised.

Toyota also have a deep management philosophy, and this is intrinsic to such an extent that Mike Rother, who has studied and written extensively about Toyota, say that even people from Toyota can not articulate it. This is the same way that you can not articulate the lawful dynamic principles of the One plant, it can only be grasped intuitively.

While a few scientists who were contemporaries of Goethe did understand his great achievement exactly, the vast majority did not, and perhaps this is still true today, a situation exacerbated by the fact that Goethe’s delicate empiricism as he called it is either not considered science, or not considered at all. But now, with the growing interest in chaos and complexity theory, the time is now ripe for a re-appraisal of Goethe, and just how fundamentally important his main insight and contribution to science was, and is.

Henri Bortoft The Wholeness of Nature: Goethe’s Way of Science

Thomas Johnson and Anders Bröms Profit Beyond Measure: Extraordinary Results Through Attention to Work and People