This week saw the 9th Strategy Execution Summit take place in São Paulo, Brazil, just one week after Rio+20. The summit, organised by the consultancy Symnetics, along with their partner Infinity, attracts CEOs, presidents and directors from many of the largest and most important companies and organisations in the country, and as a result is now regarded as one of the most important due to the depth of discussion and debate, and for the way in which subjects such as sustainability, resilience and education are not treated as peripheral subjects, but are very much discussed as an integral part of the wider topic of business strategy and its execution.

The theme of the whole event was “the emerging future and transition” (futuro emergente e transição), a theme which is very much a part of the vision of Maria Auxiliadora Amiden, Director of Education  at Symnetics responsible for the summit. She brought together an amazing array of speakers, which as well as including Robert Kaplan, a professor of Harvard Business School and a long-time partner of Symnetics who was there on the first day speaking about the execution of strategy in relation to risk management and Balanced Scorecard, Juan Pablo Scaeffer, Director of Sustainability at Codelco, Chile, talking about collaborative strategy, and also Isaac Edington, President of Instituto EcoD, Denise Hills, Head of Sustainability, Itaú-Unibanco to name just a few. (The full list of speakers is here).

Rio+20 was general regarded as an utter failure, not just by NGOs and environmental groups, but by many governments. As George Monbiot put it, Rio+20 was the “greatest failure of collective leadership since the first world war.”

The efforts of governments are concentrated not on defending the living Earth from destruction, but on defending the machine that is destroying it. Whenever consumer capitalism becomes snarled up by its own contradictions, governments scramble to mend the machine, to ensure – though it consumes the conditions that sustain our lives – that it runs faster than ever before.

After Rio, we know Governments have given up on the planet, Guardian, 25th June, 2012

Perhaps this failure was entirely predictable? Shortly before the summit, Hannah Griffiths, head of campaigns and policy at the World Development Movement wrote in The Guardian that there were battles raging over both the definitions and meaning of sustainable development and green economy.

Brazil at this moment in time is a country with great problems and great challenges. But I am not going to single it out, since as far as I can see, this is true of pretty much all countries in the world, be it the collapse of the global banking system in Europe and the USA contaminating economies worldwide, or the ongoing yet much underreported nuclear disaster at Fukushima in Japan, which likewise threatens to contaminate the global ecosystem. Where ever you decide to look, there are problems and challenges, and I feel that Maria should be applauded for her vision of the Strategy and Execution Summit this year, and especially for the way it embraced the notions of sustainability, resilience and education in their widest meanings.

I was at the Summit for the final day, which began with a presentation by Sérgio Chaia, President of Nextel, who talked about how to motivate people for sustainable results. Nextel (and Sprint) is constantly rated as one of the best companies to work for, as one of the best places to begin a career, and was ranked the 3rd greenest company in the US. But have a look at Sérgio’s slide above. In it you can see a figure meditating. Sérgio’s inspiring talk was very personal, and he told us how he had taken up Buddhist meditation, and using this to really help him find his path in life.

This for me was a wonderful example of what I see as the Transition of Consciousness. I took this photo of another of his slides. It says

I am more dependent on others than they are on me

How often do you hear a President of a company talk in this way, revealing this spiritual side of their lives in a business conference of the highest level? Much of Sérgio’s talk was about the need for dialogue and for true listening. I have written previously about Bohmian dialogue (as developed by physicist and philosopher David Bohm) and here was a great example of it in practice, with the results speaking for themselves in terms of a motivated and happy workforce.

Later in the morning there was a panel session on the status of education in Brazil and the challenges of developing and empowering people in Organisations. Chaired by Maria, this session was with Priscila Cruz, Executive Director of the movement Todos Pela Educação (Education for All), and Luis Norberto Pascoal, President of Grupo DPascoal, a major tyre company in Brazil.

As you may guess from its name, Todos Pela Educação is a movement whose aim is to improve the level of education for all children in Brazil. Maria played a role in the creation of the movement with Priscila, and Luis was one of the founders of the movement as well. I spoke with him briefly before this session, and he told me how sustainable Grupo DPascoal was, becoming carbon neutral or perhaps even more so since the 1970s, before the word sustainability had even come into use. For each tyre produced, they plant one tree, and this was an amazing thing to hear from Luis who has a great personal concern for both the environment and also of course the people of Brazil. 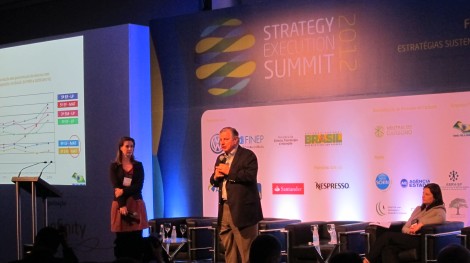 In this photo above, you will see in the slide that Priscila was presenting a number of metrics that Todos Pela Educação use in measuring the progress of theirs and many others efforts. The results were shocking, with one statistic really standing out. In Brazil, only 11% of children who finish high school reach a minimum level of proficiency in mathematics that Todos Pela Educação define in their goals. Note that this is the bare minimum, so the actual percentage of children achieving either average proficiency or even a good level of proficiency will be much less. Obviously the results for writing and reading were almost just as bad, and due to the methodology, it may even be that even more children are missed in the measuring, so these could be optimistic figures at best.

It was at this point that Luis got up and asked Priscila if he could say a few words to the audience, a very emotional moment. He asked the audience what does this mean for them? What does this mean for the sustainability of Brazil? He pointed to a person in the front row, and said that well they may be using a smart phone and computer, but how could Brazil develop and be competitive if this was the level of proficiency in children today?

At Rio+20 there was no discussion of education as far as I was aware. But Luis made an extremely pertinent point. Sustainability is not just about being carbon neutral. It means so much more than that, and as Sérgio pointed out as well, if we do not understand that if in taking care of others we also take care of ourselves, then the future does indeed look bleak. 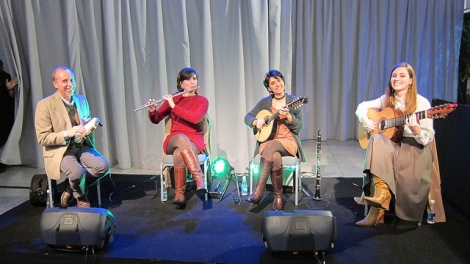 It was really great to be at the event and to meet so many interesting people. I arrived the evening before, and attended the evening cocktail party where a really wonderful band Choro das 3 were playing for all the guests. This family band, consiting of three sisters and their father play chorinho, the first ever Brazilian music which developed in the early part of the 1900s and which would be the precursor to samba and bossa nova. I had not heard this style of music before, so it was great for me to be able to hear such a good band in such an intimate venue, and also learn more when talking to the band afterwards.

The other thing I should add was that every delegate at the event left with a copy of the book Os 50+ Importantes Livros em Sustentabilidade. This book is a Portuguese translation of the book The Top 50 Sustainability Books, and was made possible with the generous help of Instituto Jatobás. I have already written a blog about the launch of this book in Brazil, if you are interested in finding out more about it.

As well as organising the summit, Maria also is responsible for running the Symnetics Strategy Community Group, a group consisting of strategists from some of the top Latin American companies which meet once every two months for dialogue, discussion and personal development. Maria also invites guest speakers to inspire, teach and facilitate learning for the community, and I have been invited along in August to discuss sustainability. As a continuation of this article I will report back after the event, as I talk about the need for true dialogue a lot, and unlike Rio+20, this is one of the most innovation forums for discussing and developing strategy in Brazil and perhaps indeed in Latin America.

While the eyes of the world were on Rio, I felt that this article today was incredibly important, to help people maintain faith and optimism in humanity. The naming of the summit was carefully chosen to reflect just what a bifurcation (or turning point) Brazil is experiencing in its still young and very much turbulent and exploited history. But amazing things are happening, and many other groups I know went to Rio to participate outside of the main conference and to really push forward sustainability despite our governments around the world giving up on us (and of course this means themselves too).

As I always say, let nature be your teacher. When you do that, and truly listen, and act without ego, some very amazing things can happen.

Last year Maria brought Satish Kumar, Earth Pilgrim and founder of Schumacher College to São Paulo as the keynote speaker of the 8th Strategy Execution Summit. I accompanied Satish during his stay in Brazil, and you can read about this amazing week in this previous article of mine:

Reflections on four days with Satish Kumar in São Paulo