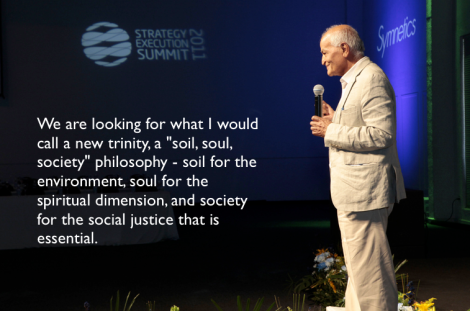 On the 9th and 10th September this year the 11th Strategy Execution Summit will be taking place in São Paulo, organised by Maria who is the Director of Education at Symnetics, the Brazilian independent consultancy hosting the event. It is the largest event of its kind in Latin America, bringing together a diverse range of company presidents, CEOs, directors and key opinion formers from the largest national and international businesses, organisations and government departments to discus business strategy, both current practice and future directions.

While this may sounds quite dry, there are two related aspects of this summit that I feel are of great importance to the development of Brazil. The first is that my wife Maria Moraes Robinson took over responsibility for the event in 2011, and decided to introduce the theme of sustainability as an important aspect of strategy to all subsequent summits. As an example of her commitment to this theme, in 2011, she invited Satish Kumar, founder of both Schumacher College and Resurgence magazine, and one of the world’s most respected peace and ecological activists to address the audience as the keynote speaker. This was a quite sensational, emotional and inspiring speech, in which Satish broke out into a mantra half-way through, and to this day people who attended still remark on the impact Satish left on them that day.

It has been fascinating to see the development and progress of this dialogue across the most recent summits, especially as this year sustainability will be discussed in a panel session, examining how the issue is now moving from being a department in businesses to a theme which is now a major dimension of core business strategy.

The second point of interest is that Maria and her team work extremely closely with all the participants to construct a coherent narrative across the two day event. Presenters do not just bring along their standard presentations given at other conferences, they work closely together so that participants understand how each presentation connects with the overall event, and to allow participants to leave the event with a very clear understanding of how what they have learnt can be implemented on a very practical level in their organisations.

A key principle in any ecosystem is diversity, a quality which leads to both resilience and creativity and the emergence of new structures and new thinking. What makes the summit so special is that in addition to business leaders from both Brazil and from outside, Maria has invited many an interesting guest speaker to provide a much needed alternative perspective, and one of the most emotional talks was from Guti Fraga, a wonderful actor and director who, talking straight from his heart and without slides, gave a very moving account about his work helping children in some of the most dangerous favelas, or slums, in Rio de Janeiro.

In 2012 Luís Norberto Pascoal, President of DPaschoal spoke about Todos Pela Educação (Education for All), the national movement he co-founded whose aim is to improve the level of education for all children in Brazil, and Sergio Chaia, CEO and President of Symantec for Latin America has spoke about Buddhism, leadership in an extremely personal and revealing presentation, exposing both his successes and some of the most difficult moments in his corporate career.

If diversity is a key principle for an ecosystem, the ability to make sense of an unpredictable environment in constant flux is a key principle for economic resilience of an organisation. Two-way meaningful dialogue is therefore a key element of the Strategy Execution Summit, and hence there are both in-depth workshops and many different in reactive panel sessions designed to really help participants engage with the conversation across the two days. 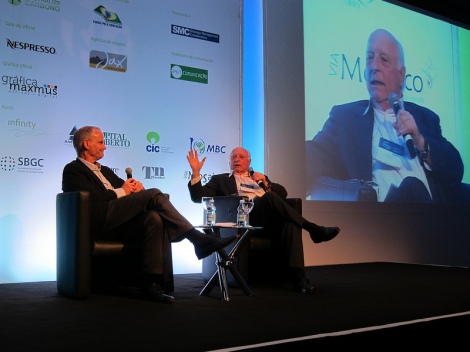 Brazil finds itself at a huge turning point this year and in this moment, experiencing both its evolution on the world stage but with ever-increasing turmoil and dissatisfaction amongst Brazilians on its home soil. The rich discussions always include extremely senior government representatives and members of non-government organisations, who are able to add their voices and their opinions to the narrative.

I think one of the most impressive talks I watched was the dialogue with Dr. Jorge Gerdau Johannpeter, the keynote speaker from 2013 last year who did not present, but spoke in conversation with Mathias Magels about leadership, education, human values and the challenges and opportunities for Brazil. Dr. Jorge is one of the world’s most important entrepreneurs, and in addition to his business interests is one of the key advisers to the Brazilian government.

Dr. Jorge last year said that as an optimist “Brazil can really be a very strong country, not in the distant future, but in ten years. There is a lot to improve, but it is not impossible”. Although it does seem that Brazil is now experiencing yet more turbulence, the need for optimism and ethical and focused leadership has never been more important for Brazil, hence the theme this year being Rethinking Strategy in Times of Change. This theme was chosen to emphasise how companies must now rethink how they manage themselves, given that the reality they are now facing is becoming ever more complex.

The first day of the summit this year will focus on new ways to manage strategy. What are the implications for the short and medium terms, and given that it is an election year in Brazil, what can companies expect in the next four years? One particular panel session will discuss how some of the largest companies here in Brazil are now preparing for this future, what their beliefs are, where they plan to invest, looking at both the Brazilian economy and also framing their discussion in wider geo-political implications as well.

Speaking on the first day will be Dr. Maílson da Nóbrega who was the Minister for Economics in the Brazilian government some years ago, Reinaldo Garcia, President of GE for Latin America, Eduardo Toledo, a counsellor for many companies, and Cláudio Gastal whose work is focused on improving management in the public sector. These speakers offer a potent mix of views about economic and business reality in Brazil, and what their expectations for Brazil are.

Also speaking on the first day about the management of extremely complex projects will be Ricardo Vargas. Vargas was the global President of PMI (Project Management Institute) and nowadays is responsible for complex projects in the United Nations, dedicated to improving the management of humanitarian, peace-building and infrastructure development projects in dozens of countries, such as Haiti, Afghanistan, Iraq and South Sudan.

The theme for the second day will be emergent themes for managing strategy, with plenty of discussion around innovation, including the participation of Petras Amaral, Head of Corporate Design from Marcopolo who will be discussing they created a new centre of innovation, and have made the shift from a focus on bus manufacturing to a focus on the future of mobility. Daniel Scholten from 3M will be discussing disruptive innovation business models and there will also be a lot of discussion about how to lead organisations in the context of complex scenarios, with Nilma Ribeiro from Votorantim Industrial sharing her experience, and a panel discussion will look at open government and how to more fully involve the public in strategic decisions.

As I mentioned at the start of this article, sustainability has now shifted in Brazil from being a peripheral activity to playing a central role in core business strategy. In a panel session Daniela Hollo Aiach, Director of Sustainability for Amcham (The American Chamber of Commerce in Brazil) will be talking with two winners of their prestigious Amcham Eco Awards: Denise Lana Molina from Schneider Electric Brazil and Daniela Rodrigues Alves from Tetra Pak. 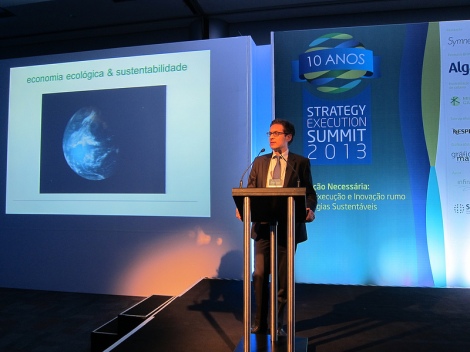 Ending the day will be a debate led by Mauri Seiji Ono, Vice President of Corporate Strategy at the major Brazilian conglomerate Grupo Algar, discussing how strategy can be implemented in a large corporate group across multiple sectors considering the complex and dynamic wider environment. Mathias Mangels will be hosting this debate, and will be asking how strategy can be implemented, how the values of the company can be retained and nurtured, and how to deal with the culture.

Time and again I see many foreign companies entering the Brazilian market only to flounder, with many losing their investments and deciding to exit to cut their losses. The huge mistake in many cases was to use their existing mindsets and approaches in markets in the northern hemisphere and expect these to work in Brazil with absolutely no analysis or planning for an extremely different and complex business, economic, political, legal environment.

While from a project point of view, the World Cup does not exactly provide the best showcase for Brazil, but year after year the Strategy Execution Summit has and continues to showcase the most successful, cutting edge and future looking strategies, case studies and projects, thus providing one of the richest and most important networking events for executives looking to both understand the Brazilian and Latin American context better, and to develop high level contacts with a wide range of decision-makers, stakeholders and key opinion formers. The summit also contains a number of parallel workshops which allows delegates to tailor the summit to their particular needs and interests.

The Strategy Execution Summit is an amazing opportunity to mix with successful Brazilian business leaders, to hear about how they are dealing with the challenges that Brazil is facing. I myself have learnt a huge amount from attending each year since 2011, and Symnetics have to be applauded for creating an event which has as a clear objective the interactive teaching of the most up-to-date practical and executable knowledge and experience from those who are really tackling the complex, volatile and unpredictable scenarios away from the media spotlight.

Strategy Execution Summit 2013 Day One: The Transition of Business