It must be pretty tough being Brazilian right now. If you are not following the Brazilian soap opera that is Brazilian politics, I think it is beyond my narrative skills to explain the thuggery, plotting, corruption and intrigues.

But it kind of boils down to the fact that there is a huge amount of corruption right across the political spectrum, and even when a very senior politician is discovered with their pants down in the form of the discovery of a secret Swiss bank account with millions of dollars, well that is still not a resigning matter and is provides no hurdle to the continuation of being in office. 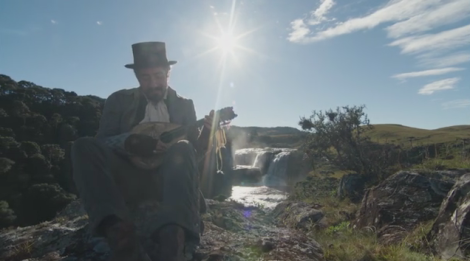 The political situation is in direct contrast to a very phenomenal soap opera airing right now on the Globo tv channel of which I have already written about, albeit in relation to the deconstruction of one single scene (In Praise of Além do Tempo and Defence of Brazilian TV).

This soap opera deals with the question of morals, ethics, values and karma, karma which is carried across life times. The writing I have to say is quite brilliant, with the narrative from the current period’s drama reaching a crescendo last night with the dramatic last-minute abandonment of the wedding of Count Felipe Castellini (played by Rafael Cardoso) and the dastardly plotting Melissa Borghini (played by Paolla Oliveira). 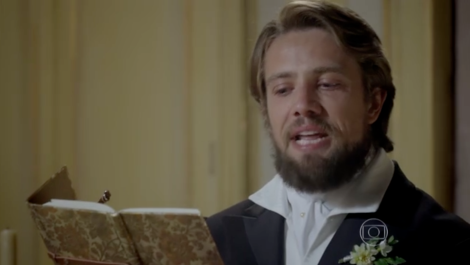 In the final scenes of last night’s episode, Count Felipe finally discovers the diary written by his late wife in which it is revealed the role Melissa played in the break up of their marriage. Wrought with anger, Felipe confronts Melissa who breaks down at his feet and implores him to still marry her. As someone without wealth, Melissa and her family had plotted to have Melissa marry into his family, but as we witnessed in this tense and powerful scene, her life came crashing down around her.

The marriage now cancelled, gentleman that he is, having been unable to break out of the pressure from the social duties and pressures of his age, Felipe is now free to abscond with his true love, Lívia (Alinne Moraes) on horseback, to the shock of the guests at this great social wedding. I really have to point out the complete lack of ham in the acting, which as with Joia Rara which I have also written about at length, is superb, particularly Cardoso who summed up a raging emotional performance, shaking as he read the last words of his beloved wife. 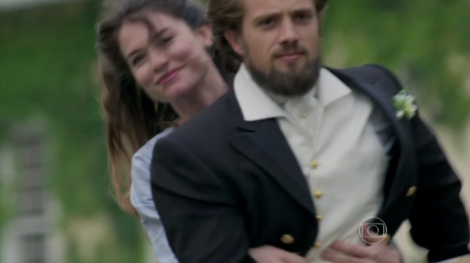 Special credit has to be given to the writer of Além do Tempo, Elizabeth Jhin, and also her writing collaborator Eliane Garcia. I mentioned Ariel previously, and since writing that article we came to disover that not only was he an angel, he was a flawed angel unable to prevent himself from interfering in human affairs, and so losing some of his angle powers. He had to re-learn the lessons of karma and to allow karma to play itself out, however much suffering this meant he had to witness to those he cares for. 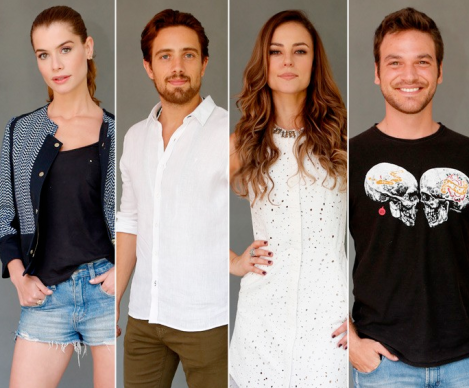 We are quite close to the stories of this generation of characters coming to a close, lives lived over a century ago, and the action will soon swap with the same actors playing new characters in this current modern age. It will be extremely interesting seeing how the karma carried over from the decisions made in these previous lives plays out in the new dramas, relationships, lessons and shenanigans of the reincarnations.

In Brazil there is the saying “everything will end in a pizza”. This saying refers to political corruption, and refers to that common scenario of politicians being discovered to be corrupt, but no charges being made, and everyone settling the situation with a meal of pizza.

However, what is incredibly remarkable about Brazil, in a script which for many Brazilians a few years ago would have seemed insanely implausible, many of the most powerful politicians and richest business owners are not only being charged, but convicted and imprisoned.

This is an amazing achievement for a new generation of Brazilian lawyers and prosecutors, many of whom it has to be said are carrying on this word under the most dangerous of conditions, requiring a huge amount of security for both themselves and their families. For many of Brazil’s corrupt elites, it most certainly is not ending up in pizza, but in porridge.

Despite having a new generation of heroes here in Brazil who are achieving results that many law-makers in most other countries continue to fail to achieve (and there is absolutely no hint of blame for the heroes of these other suffering countries), there is still a discernible despair among the population here. I find this in the daily conversations I have with people right across the social spectrum, from senior executives to the chap I buy my onions and coconuts from at the local market.

I think the answer for many of of us who are not actually immediately embroiled in the political drama of Brazil can find solace in the little actions of our daily lives, as I discovered yesterday as Maria and I went for a fish and chip lunch in a local restaurant. Sometimes it is the little things which are the big things, and our actions when infused with good intentions which come from the heart can have repercussions we never could have imagined. 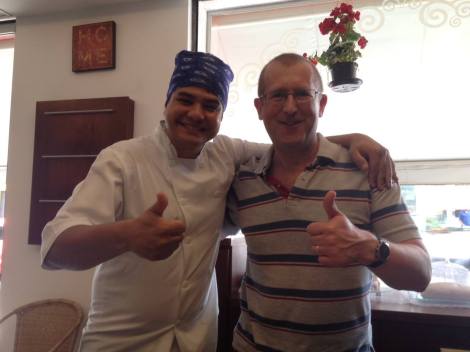 Some months ago at this same restaurant the owner created a Fish ‘n Chips dish in my honour. The restaurant was recently sold to a new owner and chef Thiago who had spent six years as a chef in London, and I had got talking to him when I went in to see what the new place was like as it is just around the corner from our apartment.

Thiago mentioned that he had fish ‘n chips on the menu, but it came with rice, beans, and french fries, but if I let him know in advance, he would do proper chips for me. I asked if he had vinegar, and he said that Brazilians use a different type to Brits, but he had the English version, and also he would really make sure it was as close to the real thing as possible. (The previous owner had not travelled outside of Brazil as you may remember). 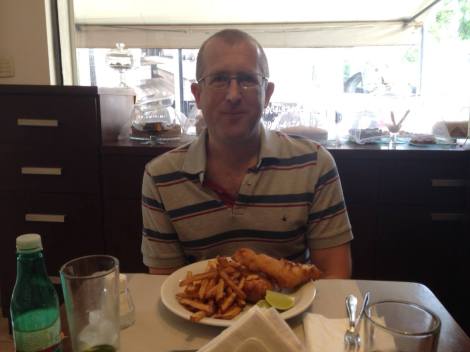 So we went in today and here are the results. The batter I have to say was fantastic, and it also came with a home-made tarte sauce. The portion was generous, and the only thing lacking was the chips, as Thiago had been let down by his supplier who forgot to bring the potatoes.

Now here is where it gets really interesting. Thiago said to me that he would be happy to make me any English dish if I give him advanced warning, and he told me today that he has been researching Yorkshire puddings, for which I do not think you can get anywhere in São Paulo (but tell me if I am mistaken).

So anyway, I have now gone from having a dish made in my honour, to a personal chef who is now hoping to develop his restaurant with maybe nights such as English night and he will also do a curry for Maria as there are limited Indian restaurants here. If you are interested if you are in São Paulo, the new name of the restaurant is La Vinã, and it’s on Rua Nanuque in Vila Leopoldina.

I was so pleased with this utter dedication to care for his customers, his desire to continually improve his restaurant and his desire to really please me with something I am missing from home, I decided to put these photos on a Facebook page for foreigners living in Brazil, especially as British grub in Brazil is pretty much non-existent – really authentic proper British grub as opposed to Brazilian interpretations of our classic dishes.

Someone thought the fish and chips looked so good, they asked for Thaigo’s phone number, phoned him up and decided to have a meal there last night. If Thiago really commits himself to offering great dishes not available elsewhere at reasonable prices  in a nice environment, then definitely people will come.

Brazil is in a real crisis right now, but it is not so much an economic crisis as both a political crisis born of its own making, as well as being a crisis of confidence. What is so desperately needed is for people here to come together, and this does not have to mean grandiose social programmes, but often little actions to help the nascent roots of new businesses and enterprises.

Maria was very funny when she was remarking to me about the way I have managed to end up with such a special chef dedicated to creating the dishes I would like in a restaurant so close to home. I have no idea what my previous karma was, but yesterday I felt I must have done at least something right at some point in time. Who knows? 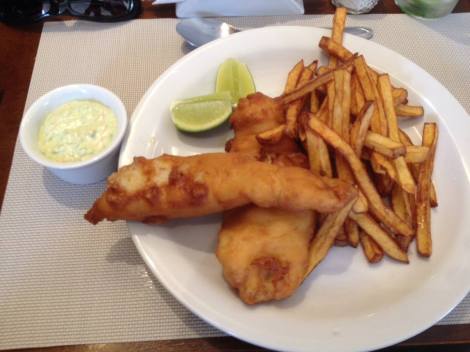 Will Brazil’s political scandals end up with a pizza as they always have done? Maybe, but there is a very real chance that we could see one of the most massive jailing of huge swathes of a political class a country has ever witnessed. 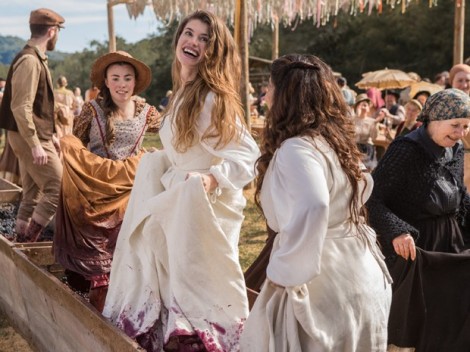 But you know what, with love in our hearts, real true love as the love between Felipe and Lívia, with a true love for our country and fellow friends, family and every sentient being, Brazil and everywhere experiencing such pain and suffering, could just about manage to transition to a deeper, loving, harmonious, just and truthful reality, one where we live with universal human values.

In Praise of Joia Rara

One response to “Will Everything End with a Pizza or Fish and Chips?”