As I am sure the vast majority of you will know, Henri Bortoft was one of my teachers at Schumacher College. Henri was a physicist who studied the problem of wholeness in quantum physics as a postgraduate student under David Bohm. He then went on to work with the philosopher J.G. Bennett where he would extend his studies of wholeness into the areas of phenomenology and hermeneutics.

The depth of the insights gained from his work across such a wide breadth of disciplines allowed him to then explore the scientific body of work of Johann Wolfgang von Goethe, resulting in Henri publishing his 1986 monograph Goethe’s Scientific Consciousness. This work was expanded into what is now regarded as one of the greatest articulations of Goethe’s approach to science in The Wholeness of Nature: Goethe’s Way of Science published in 1996 by Floris Books. Henri would then spend the next years working on his final book Taking Appearance Seriously: The Dynamic Way of Seeing in Goethe and European Thought published in 2012, also by Floris Books, shortly before Henri passed away.

Henri’s dynamic conception of wholeness forms the primary foundation for the masters degree in Holistic Science at Schumacher College. After he had retired, Henri would continue lecturing at the college, and I had the huge privilege of spending a week with Henri in 2009, a week which provoked one of the most profound shifts in my thinking I have ever experienced. This shift did not happen during that week itself, it was in the months and indeed years of continuing to study and apply Henri’s philosophy that I would really come to appreciate the depth and importance of the dynamic way of seeing and how I could then start to apply the insights in business, innovation and design. 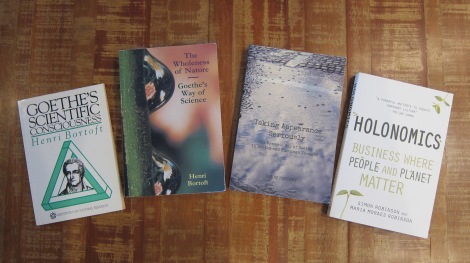 It was Henri’s dynamic conception of wholeness which inspired Maria and I to write our own book Holonomics: Business Where People and Planet Matter. In Holonomics we introduce readers to Henri’s philosophy of wholeness, and show how it can be understood in relation to systems thinking and complexity science, the development of new business models, and also how it relates to universal human values. More recently I have been developing my concept of Customer Experiences with Soul which extends the insights from hermeneutics and phenomenology into the area of customer experience design.

Henri’s work is powerful because when truly understood, it changes our way of seeing, and takes us into an understanding of meaning and being. These are not just questions for science and philosophy, but for helping us understand our relationship to other people, to nature, to design, to the development of new organisational structures – the implications are endless.

It is for this reason I am particularly delighted to be able to present a lecture Henri recorded at Schumacher College on Goethean Science.

I am grateful to Jacqueline Bortoft, Philip Franses and Schumacher College for providing the permission to make this lecture available to you. Below are a number of additional articles I have published about Henri and his work. My review of Taking Appearance Seriously was also published in Resurgence magazine: The Dynamic Way of Seeing.

Henri Bortoft in his own words

An Instance Worth a Thousand Bearing All Within Itself

Pathways Through Holonomics Part One