This article is going to be a little different to the previous six lectures on the foundations of Holonomics. The reason is that I thought it would be extremely useful at this stage in the series to take a step back and think about what we mean by the concept of a ‘phenomenon’. 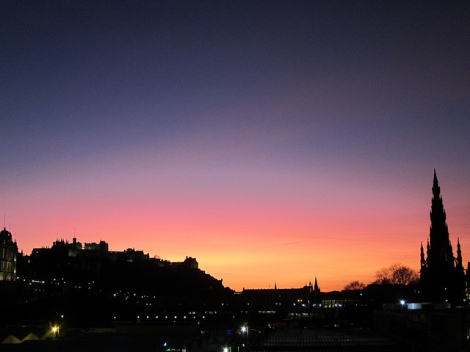 Up until now, the lecture series have been intellectually demanding. In the following lecture we will break out of this particular mode of investigation and shift into an experiential mode where we will be exploring Goethe’s theory of colour. The way in which we will be doing so is by using prisms, allowing us to reproduce the colour experiments which Goethe himself developed and described in his scientific writings. 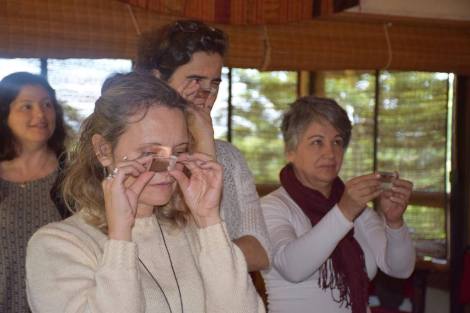 I started to work with Goethe’s theory of colour in an organisational setting when Maria and I first created our course on complexity, strategy and management at Sustentare Business School. In these lectures I would ask one student to come and carry out the primary experiments. 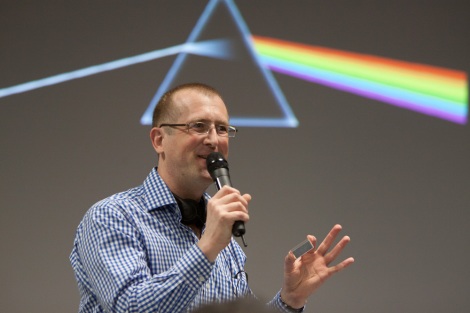 While these early classes generated a lot of discussions, I then started to import many more prisms in order to allow everyone present to take part. This then allowed Maria and I to extend these exercises into our workshops and programmes for those businesses and organisations working with our Holonomics approach in order to facilitate an expansion of consciousness and help develop new ways of seeing in leaders. 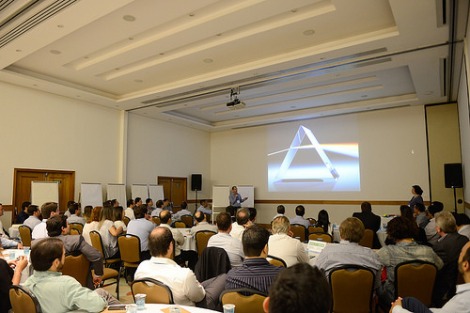 In order to appreciate and understand Goethe’s theory of colour, the only way to really do so is by carrying the experiments yourself. I therefore wanted to publish this article to give those of you who are following the lectures time to purchase a glass prism, and you too will then be able to actually experience the coming-into-being of colour, and understand the wholeness to be found withing the belonging together of spectral phenomena. At this stage my intention is not yet to define coming-into-being and belonging together – this will be done in the next two lectures when we actually work with the experiments. 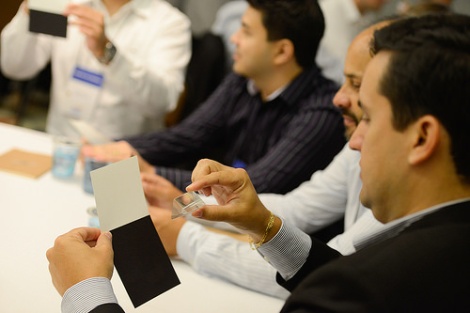 There are many different glass prisms available to purchase on-line and the typical cost if between £5 – £11. The main ones I use are 5cm x 3cm and can be purchased in the UK from Curious Minds – an online science shop featuring a wide range of science, nature, space, and technology products, toys and kits for children and teenagers. See for example this optical glass prism.

Now that I have explained the necessity of exploring colour in a phenomenological manner, before we proceed to Henri’s next lecture in which he will guide us through Goethe’s experiments, I do feel that before we do so that it is worthwhile returning to Newton’s theory of light and optics in order to be able to understand the qualitatively different approaches to understand the phenomena we experience in the world in which we find ourselves.

Lights which differ in Colour, differ also in Degrees of Refrangibility.

Newton’s Optiks, Proposition I, Theory I, describes an experiment with a red line and a blue line on black card, and thus “proving” that “Lights which differ in Colour, differ also in Degrees of Refrangibility”:

Exper. 1. I took a black oblong stiff Paper terminated by Parallel Sides, and with a Perpendicular right Line drawn cross from one Side to the other, distinguished it into two equal Parts. One of these parts I painted with a red colour and the other with a blue. The Paper was very black, and the Colours intense and thickly laid on, that the Phænomenon might be more conspicuous. This Paper I view’d through a Prism of solid Glass, whose two Sides through which the Light passed to the Eye were plane and well polished, and contained an Angle of about sixty degrees; which Angle I call the refracting Angle of the Prism.

And whilst I view’d it, I held it and the Prism before a Window in such manner that the Sides of the Paper were parallel to the Prism, and both those Sides and the Prism were parallel to the Horizon, and the cross Line was also parallel to it: and that the Light which fell from the Window upon the Paper made an Angle with the Paper, equal to that Angle which was made with the same Paper by the Light reflected from it to the Eye. Beyond the Prism was the Wall of the Chamber under the Window covered over with black Cloth, and the Cloth was involved in Darkness that no Light might be reflected from thence, which in passing by the Edges of the Paper to the Eye, might mingle itself with the Light of the Paper, and obscure the Phænomenon thereof.

We too can carry out this experiment quite easily. I have created a figure to help us do so.

If we look at Newton’s quote, he says that “its blue half will be carried something lower thereby than its red half”. Something like this:

In order to help you understand what is happening, I also took this photo of the set up, and where the prism is in relation to the screen:

As you can see, the blue line is perceptibly lower than the red line, thus we too can demonstrate that blue is refracted at a different angle to red.

Here is a close up photo with the lens of my camera quite close to the prism: 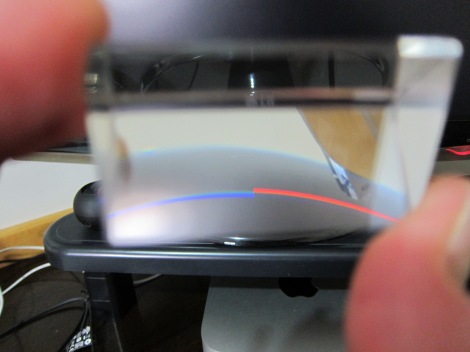 If necessary, you can click on the photo to see a larger version of it. Can you see anything in addition to the red and blue? I certainly can. I have created a stylised graphic below to give you an approximate idea of what I can see. (There can be no substitute though for doing this experiment yourself with your own eyes).

Photo: Simon RobinsonOne thing you need to know is that I played around with various thickness of lines. The graphical representations therefore do not match the thickness of the lines you see in the photos.

But what can you see in the figure above? There is a green line above the blue, and for me, I can also see a very thin line of yellow under the read. You may see things slightly differently, especially when you slightly alter the angle of the prism and the distance of the prism to the screen. Hence again, you really need to be doing this yourself.

If you look really closely, you will see dark purple both above the green and also below the red. This is really hard to depict in a graphic, especially as it seems to fade out, something I have not been able to draw.

Newton does not mention these effects in his description of what he “sees”. And neither does in experiment 2 in Optiks, in which he uses a thread which is half painted red and half painted blue:

Exper. 2. About the aforesaid Paper, whose two halfs were painted over with red and blue, and which was stiff like thin Pasteboard, I lapped several times a slender Thred of very black Silk, in such manner that the several parts of the Thred might appear upon the Colours like so many black Lines drawn over them, or like long and slender dark Shadows cast upon them. I might have drawn black Lines with a Pen, but the Threds were smaller and better defined.

This Paper thus coloured and lined I set against a Wall perpendicularly to the Horizon, so that one of the Colours might stand to the Right Hand, and the other to the Left. Close before the Paper, at the Confine of the Colours below, I placed a Candle to illuminate the Paper strongly: For the Experiment was tried in the Night. The Flame of the Candle reached up to the lower edge of the Paper, or a very little higher. Then at the distance of six Feet, and one or two Inches from the Paper upon the Floor I erected a Glass Lens four Inches and a quarter broad, which might collect the Rays coming from the several Points of the Paper, and make them converge towards so many other Points at the same distance of six Feet, and one or two Inches on the other side of the Lens, and so form the Image of the coloured Paper upon a white Paper placed there, after the same manner that a Lens at a Hole in a Window casts the Images of Objects abroad upon a Sheet of white Paper in a dark Room.

The aforesaid white Paper, erected perpendicular to the Horizon, and to the Rays which fell upon it from the Lens, I moved sometimes towards the Lens, sometimes from it, to find the Places where the Images of the blue and red Parts of the coloured Paper appeared most distinct.

Those Places I easily knew by the Images of the black Lines which I had made by winding the Silk about the Paper. For the Images of those fine and slender Lines (which by reason of their Blackness were like Shadows on the Colours) were confused and scarce visible, unless when the Colours on either side of each Line were terminated most distinctly, Noting therefore, as diligently as I could, the Places where the Images of the red and blue halfs of the coloured Paper appeared most distinct, I found that where the red half of the Paper appeared distinct, the blue half appeared confused, so that the black Lines drawn upon it could scarce be seen; and on the contrary, where the blue half appeared most distinct, the red half appeared confused, so that the black Lines upon it were scarce visible.

The main point of this article is to ask the question “what is a phenomenon?” In Holonomics we travel through the history of science in order for the answer to become ever more understandbale. It is of vital importance that for all of us to have the answer to the question clear in our minds in order to be able to reach the level of mindfulness necessary to understand the world around us.

For Newton, corpuscles of light were a real phenomenon, which he deduced logically from this experiment. There is the phenomenon which you can see in the photos, and also there is the phenomenon which you actually see, which is not just a clean and distinct blue line displaced lower than a red line; there are all sorts of additional other colours and “shades” which need to be explained.

Playing with colour and prisms helps Maria and I to discuss mental models and the dynamics of seeing with people. Newton only considered light rays, and the blue and red. Goethe on the other hand spent many years studying colour, and this led him eventually to publishing his Theory of Colours. Goethe also considers the active role the black plays, something which may seem strange, but Goethe understands the phenomenon of colour as it appears as an integrated whole. The next lecture will take us into an experiential understand of what this actually means.

2 responses to “The Foundations of Holonomics 7: What is a Phenomenon?”