I am delighted today to be publishing this third dissertation from the 2014 class of Holistic Science at Schumacher College. Joana Formosinho is a zoologist with a background in animal behavioural research, but as she says in her introduction, she felt that her research and research methods had not brought her a profound level of insight:

I found that the doing of the science took me away from my study subjects rather than bringing me closer to them. After months of science on a particular species, I would find I knew a lot about them that was factual, but did not understand more about their way of being in the world; sometimes, I found I understood less, as though being was drowned in a sea of facts.

This is a feeling deeply shared by many scientists, including myself, trained in cognitive psychology, which brings them to Schumacher College, and to the masters degree in Holistic Science which has as its focus the mission of developing a science of qualities to complement quantitative scientific practices.

Joana’s dissertation is titled “Encounters with otherness: Towards a participatory way of knowing” and you can download a copy below. Please note that due to her illustrations, the file is quite large, 67MB, due to Joana’s beautiful sketches in which she illustrates her work. 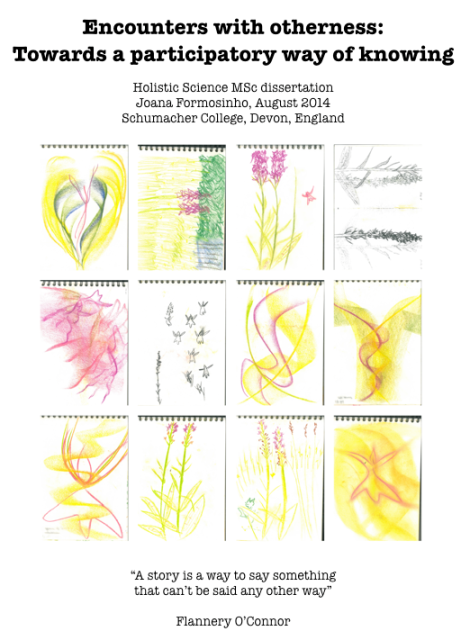 Encounters with otherness: Towards a participatory way of knowing

In introducing Joana’s dissertation, I have two different audiences to consider. The first audience are those of you who are already familiar with Goethe’s way of science, with participatory forms of enquiry taught at Schumacher College and other like-minded educational institutions, and of the differences between qualitative and quantitative research methods.

A second audience though who come to Transition Consciousness while having deep interest and a great deal of experience in the areas of sustainability, innovation, strategy, leadership and business design, may not be so acquainted with the form of inquiry that Joana’s dissertation takes, and so I thought I would first introduce some words which come from the late Henri Bortoft, one of the world’s foremost scholars in Goethean science:

Goethe came to believe that all of life unfolds through the repetition of patterns. Everything that exists is a record of a unique pattern of unfolding and when you observe anything deeply enough you will see the unique underling pattern that is its essential nature.

Radical Inclusivity is the direct knowing of the nature of reality. When we liberate our minds, at least to some extent, from its current perceptual framework. We begin to see the underlying pattern of reality that normally lies hidden beneath our conventional awareness.

These three paragraphs of Henri’s were recently commented on by James Soutter, a regular contributor to the Henri Bortoft Facebook page which brings together researchers and practitioners of Goethean science, as well as those who have an interest in hermeneutics and phenomenology, and James made a hugely important observation on the importance of what Henri was trying to communicate:

These three paragraphs of Henri’s [above] express something which he seemed very keen to help people understand. Yet although there is little that is actually difficult about what he is saying here, its implications are so mind-blowing – and go so much against what we have been taught – that most people just seemed to glaze over when confronted with it.

The epistemological implications of this are beyond immense. It means that knowledge is directly conveyed to us – without any intermediation – by the appearance, the manifestation, of the phenomenon within the imagination (another point Henri was often at pains to try to get across). True knowledge is the appearance of the phenomenon in the imagination, again not as a static image or representation, but in the dynamic form of appearing which shows us truths about the phenomenon – as a direct knowing – which are not discernible merely by an outward examination of it. And Henri wasn’t being hyperbolic when he suggested this is a ‘mystical approach to science’: this is a form of knowing which is identical to the knowing of the mystics (for instance, the ‘infused science’ – “knowledge conferred on human beings without previous experience or reflection” – of the Catholic mystics).

And so this brings us back to Joana’s dissertation, which in focusing on encounters with otherness, is her journey into acquiring knowledge of things in themselves. The dissertation is written from the first person perspective, as Joana points out for the following reasons:

Firstly, because one of the problems with modern science is the passive, impersonal way we talk about it. By virtue of the methodology—detached objectivity—the scientist is removed from the science, and from the sharing of the science with others. The intention behind this is a striving towards objectivity, to get ourselves out of the way of seeing. It has a fundamental problem, however: that we, us as subjects and seers, are the only way we have to access the world and that no matter how much we try to remove ourselves, we are still there, trying to remove ourselves.

Secondly, because experiential narrative is in keeping with the phenomenological tradition within which I am working, where the focus of investigation is on direct experience as lived.

Thirdly, because the direct experience of the practicing scientist matters. Science is a human narrative of the world and scientists are transformed as citizens in the doing of their science. The science we have is an expression of our society and, engaged with at the level of process as well as outcome, can reflect our society’s state of being back to us for reflection.

All of these three reasons focus on science, but as Maria and I show in our book Holonomics: Business Where People and Planet Matter, this approach which facilitates encounters with the higher dimensions of phenomena are of equal importance in business. Last week I spent two days teaching what we call holonomic thinking to HR professionals, an approach inspired by Goethe’s phenomenological approach to science, where we re-aquaint ourselves with ‘seeing’.

In these classes rather that exploring encounters with plants, we explored the sensory world of restaurants, and discussed how few business leaders have this expanded level of consciousness, which when combined with humility, keeps them open to an intuitive understanding of customers, clients, stakeholders and ultimately, their own business, their products, services, and of course people. I use this example to show just how important this exploration into ‘otherness’ is, and that it is not a philosophical extravagance, but a desperately needed aspect of our education that our current schooling misses out, thus leaving us as adults with a highly diminished and restricted experience of reality.

For this reason I strongly recommend that you download a copy of Joana’s dissertation and take time to enter into the spirit in which it is written – detailed, sensory and insightful. It complements the other two dissertations I have also recently published by Louise Pardoe and Richard Widows (links below).

Reading Joana’s dissertation is an opportunity to experience a first-hand account of ‘exact sensorial imagination’ and the other stages of Goethe’s extremely fluid methodology. As she writes in her closing section, ‘Goethe saw the essential aspects of nature as unquantifiable and sought instead to participate in nature’s qualities, to open himself to the things of nature, to listen to what they say.’ When I speak to students, I tell them I am attempting to help them master just two things – seeing and being receptive. When we acknowledge otherness, we acknowledge that we need a degree of humility to achieve this degree of openness to otherness, but those who do achieve this humility, gain an expansion of vision and untold power. Not a power over others, but in recognising others, the ability to co-create untold new realities in authentic participation.

To be taught how to listen to nature is to be taught from nature about our own powers of perception. These are huge lessons to learn, and I hope you enjoy all of these dissertations, that you yourself may then wish to be inspired to explore further the participatory way of knowing.

What if Human Beings Could Experience Life and Death Simultaneously? A Dissertation by Louise Pardoe

One response to “Encounters with otherness: Towards a participatory way of knowing – A Dissertation by Joana Formosinho”