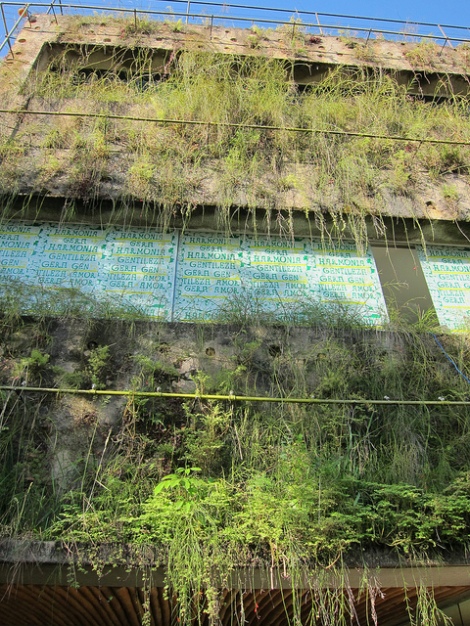 On Saturday I took Maria to visit Harmonia 57, a living, breathing eco building in São Paulo. If you have not already seen my first article about this wonderful place, you may want to take a quick look before proceeding with this article.

Previously I had visited in the week when it was quiet, but this was a Saturday with many more shoppers. Also I had not realised that in fact the four shops I had seen there were in fact just one shop, the clothes shop Farm from Rio de Janeiro.

The ground floor room has a few bright clothes, some accessories, and the tills where you pay. On the first floor, there is one room which has the changing rooms, plus many bright cushions to relax on, and another glass walled room at the front with more beachwear. On the second floor, there is another room of clothes and also a room which is just for the employees to relax in.

Me chilling out on a hammock

As we explored the space Maria asked me if I thought that this was a Goethian building. We are both fans of Goethe, and I have been taught Goethian science. This may seem a strange question to ask, especially if you are not aware of Goethe’s many studies of plants, which culminated in his work The Metamorphosis of Plants. It was a great question to ask, and it certainly made me wonder what Goethe would have thought had he ever visited Brazil, and Harmonia 57.

One of the hammocks

As I was thinking about my answer, below us a father was relaxing, laid out on a large outdoor cushion while his two young daughters ran around and played on a nearby hammock. Presumably his wife was inside trying on clothes. I replied to Maria that yes, I thought that the building was in fact Goethian, and that I could sense that it was an authentic whole. This is the language that Henri Bortoft uses when describing systems, and this seemed like a great way to describe Harmonia 57, in contrast to the artificial and sanitised shopping centres elsewhere in the city.

It felt authentic since every piece of the structure, people, shops and clothes really felt as if they all belonged together. For me the whole is the sense of place which comes to expression in all of the parts. Here was a father being his true self, his real self, with this ecosystem allowing the children to be free and be themselves in their truest form. This may sound pretentious and if it does I apologise for my lack of articulateness, but what I am trying to express myself is an intuition of authentic wholeness through words.

It is different to a typical modern shopping centre where we are reduced from human beings to consumers, the last places on earth where for me I would want to just chill, cooped up out of natural sunlight, natural surfaces, and there is certainly no invitation at all just to laze around without a care in the world. I do of course accompany Maria when she wants to go clothes shopping, but hi tech clothes shops could really learn a lesson or two from Harmonia 57 I feel when it comes to blokes! They also cater well for children, with free sweets, cookies and lemonade that you help yourself to as if you were in your own kitchen at home if you are feeling thirsty.

The sense of be-ing in an authentic whole, or maybe authentic ecosystem in Harmonia 57 was dramatically juxtaposed with a rude sight that awaited us the following morning when we reached the peak of the highest mountain in São Paulo, Pico do Jaraguá. What we saw from this height was the hideous blanket of toxic smog, a horrible grey cloud of pollution that hangs over the city.

Here you will see it close up: 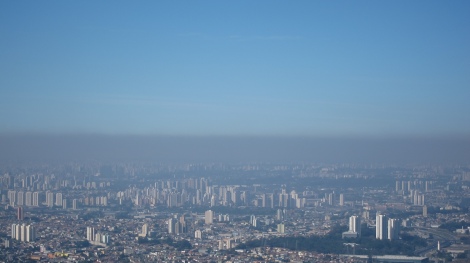 Obviously what has led to this is a complex mix of political, economic, historical, sociological, psychological and geographical factors, and I would not want to trivialise any of these. But overall, the problem comes from inauthentic wholeness, a fragmentation not just in Brazilian society, but of course in the global society from which international business comes to exploit Brazil with no care of those who are themselves exploited and damaged.

All the time I hear analysts discussing their sexy megatrends and talking about the move to mega cities to solve the world’s problems. Without systems thinking, and without the ability to understand what constitutes an authentic whole, these futuristic visions of chic urban living will result in no more than the poisonous chaotic sprawl that we see in São Paulo today.

If all of this sounds a bit negative, I don’t mean to be. I am someone who will always look for solutions, and in my previous article, written in Portuguese, I examined a very modest proposal for developing some mountain bike trails in the state park of Jaraguá which itself is a biome of extreme ecological importance, but of course threatened by such heavy pollution.

The park itself is wonderful, with a number of trails having been built for walkers. This was wonderful for me, and as I walked I did so in part meditation, really enjoying this connection with such rich vegetation, plants and trees.

This is a public park, free to visit, and as such I am not too sure that any of the rich in Brazil visit. Many public spaces are associated with the poor (although in this case it has to be said that I saw plenty of cyclists and walkers enjoying the park) and this is also true of the decaying centre of São Paulo and other Brazilian cities, centres which often have gorgeous old architecture but which now lay in ruins and which can be dangerous or risky to visit.

How different the centre of São Paulo is to the financial districts such as Morumbi. Here you can find million pound penthouses and office blocks side-by-side with favelas. here though a new cycle track has been built running along the river Pinheiros, and it has been wonderful to see cyclists using this new and much needed facility. I have to say it is hardly ideal though, running along side a 10 lane motorway (this is all one-way traffic), there are another 10 lanes for traffic driving south. Also the river has a hideous smell but that does not seem to have put off too many cyclists.

Authentic wholeness for me is living with true relationships not just with the people in our families, social groups, work and society but also in terms of our relationship with our environment, homes, cities and nature. A wonderful example of this comes from Nizan Guanaes who this week wrote an article titled The River is Living in Folha de São Paulo (the largest newspaper in São Paulo).

In this poetic and lyrical piece of commentary, Guanaes considers the impact on Paulistas (people from São Paulo) of suddenly coming into contact again with their river which had previously only disgusted and frightened them with its dirt and risk of flooding. He refers to the river as “um contato transformador” or a contact transformer.

The closer we are to our rivers, the closer we are to the transformation of our lives and to clean cities he writes. It can bring us together in an authentic whole where everyone wins, “the revitalization of the river encourages community action, increases urban mobility and access, without the need of more cars, tracks and streets, creates economic development, prevents floods, nature preserves and restores and stimulates sustainable practices.” 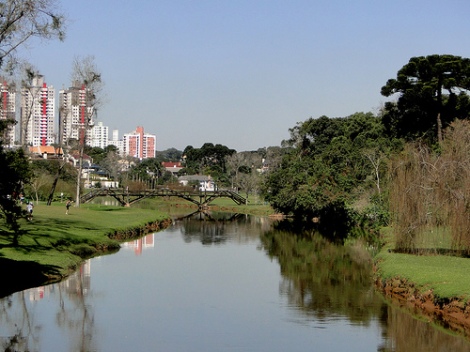 So we are back to Goethe again, who taught us not to be stuck in our verbal-intellectual minds, which abstracts, categorises and distances us from direct contact with nature. Can we learn here in Brazil to live authentically, and envision a future São Paulo where children can swim safely in lakes, where young lovers can walk hand in hand along the banks of the Rio Pinheiros shimmering in the silver light of a full moon, and where our elders do not choke to death in a cancerous air?

A green vision of Berut by StudioInvisible

Other related articles of mine include:

I never want to hear Brazil say sorry for their sport

23 responses to “Authentic and counterfeit wholes in São Paulo”